Also Check Out: 15 party drinking games to get you wasted. 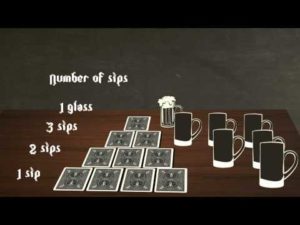 Audrey Foo does a good job visually explaining this game:

The players can also be asked to lie their cards face down and memorise them. If someone says the player is bluffing, he has to find his card. Drawing a wrong card results in penalty (making him consume 2x beer). After the pyramid is done, players can take turns memorising their deck in the initial order. For each wrong card, they are penalised.