Like Buchholz and Roth say, wearing the same shirt does not make you a team. It’s a much more deeper connection than that. A team needs to be united and have a single voice and more importantly, no place for personal egos. To be part of a team that creates something truly remarkable is a fulfilling experience. But it’s not always easy to create a good team.

A good team is a psychologically secure union of able individuals tasked with the responsibility of achieving a common goal while working in harmony so that ultimately every team member’s work is valued. 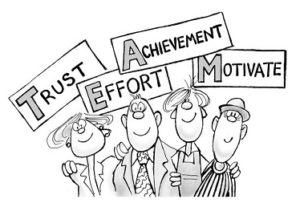 Though there may be difference in many factors like intelligence or experience between members, being in a team is about putting all those tiny egos away contributing what you can for the team to help the team achieve it’s goal.

Check out 175 teamwork quotes from all around the world to motivate you with team building.